This report from the Every Casualty programme at Oxford Research Group examines the information available on the deaths of 11,420 children in the Syrian conflict. Using casualty records from various organisations, the report is able to identify in detail the risks to children of specific ages and profiles, as well as which weapons caused the highest number of child fatalities.

Stolen Futures: The hidden toll of casualties in Syria, reveals that explosive weapons have been the cause of more than 7 out of every 10 child deaths in Syria since the conflict began in March 2011, while small arms fire accounts for more than one quarter of the total. This includes children caught in cross fire as well as others targeted by snipers, summarily executed and, in some cases, tortured.

Stolen Futures draws on the same Syrian civil society-sourced databases that informed previous casualty statistics published by the UN and others, but examines in unprecedented detail the information they contain on victims and how they were killed. This reveals that: 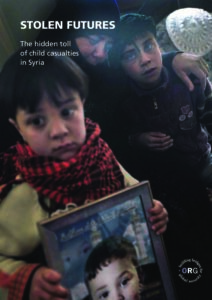 Stolen Futures: the hidden toll of child casualties in Syria