The report is based on a detailed study of the work of forty organisations and individuals that document deaths from armed conflict and violence. These casualty recorders worked across the world, in Europe, Asia, Africa and South America. Some worked within conflict zones, others from outside the affected area or after the conflict had ceased.

Towards the recording of every casualty provides a summary of the role and benefits of casualty recording, and identifies how casualties can be recorded effectively even in situations of active conflict. The paper contains recommendations for states, global civil society and inter-governmental institutions on how casualty recording can be better supported both domestically and at the international level. 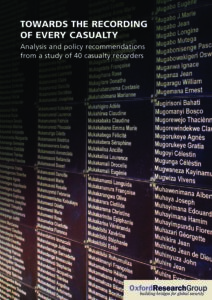 Towards the recording of every casualty: Analysis and policy recommendations from a study of 40 casualty recorders