This briefing paper from the Every Casualty programme at the Oxford Research Group focuses on civilian deaths caused by drones within Pakistan as reported by eight non-governmental organisations and media outlets. The eight institutions and their publications examined include: the Conflict Monitoring Centre’s (CMC) ‘2010, The Year of Assassination by Drones’; the India-based Institute for Conflict Management’s (ICM) ‘Pakistan Datasheet’; the Long War Journal (LWJ); the New America Foundation’s (NAF) ‘The Year of the Drone’project; The News; Pak Institute for Peace Studies’ (PIPS) ‘Pakistan Security Report’; Pakistan Body Count; and Strengthening Participatory Organisation’s (SPO) publication, ‘Trail of Tragedy’.

This paper analyses the similarities and differences between the casualty information recorded and reported by these eight organisations, and the challenges they share. It aims to provide an informed and informative examination of current work on civilian casualties in Pakistan, as well as offering critical insight and constructive recommendations in response to the disparities in reported findings. This paper concludes with some observations on key challenges facing those attempting to record civilian deaths caused by drone attacks as well as some potential solutions. 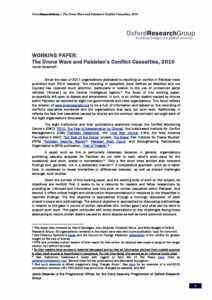 Drone Attacks, International Law, and the Recording of Civilian Casualties of Armed Conflict