During 2019 and 2020, ECC conducted detailed studies of the work of four members of the Casualty Recorders Network, to assess their level of conformity with the Standards for Casualty Recording. The organisations surveyed were Airwars, Crisis Tracker, FAFG and Nigeria Watch.

The report identifies collective strengths and areas for further development, noting that the majority of agreed Standards are met – to varying degrees – by all four organisations sampled. This suggests that the Standards for Casualty Recording reflect a demanding but realistic picture of best practice within casualty recording, across a range of conflicts. We hope these findings will encourage further standardisation across the casualty recording field, to share and embed best practice widely. 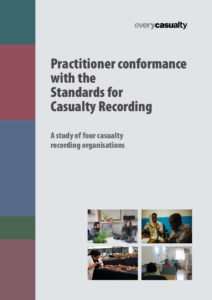 Practitioner Conformance with the Standards for Casualty Recording