This article by former British Army Colonel Richard Iron, co-authored with the Every Casualty project at Oxford Research Group, was originally published in the British Army Review. It argues that there are powerful, pragmatic reasons for the military to both collate and release information on civilian casualties in war zones. 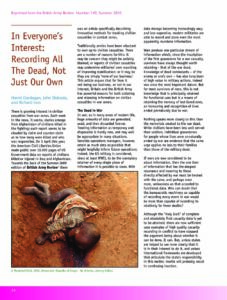 In everyone's interest: Recording all the dead, not just our own