The Every Casualty programme of the Oxford Research Group has identified all of the elements of the international legal responsibility to identify, bury and record civilian casualties of armed conflict in the same way as military casualties are treated. This issue is expanded upon in the current paper, which applies the international legal obligation to record civilian casualties of armed conflict to drone attacks.

The paper looks at the example of drone attacks currently being conducted by the United States Central Intelligence Agency in Pakistan and Yemen. It concludes that this context represents a serious violation of the various components of the obligation to record civilian casualties. The situation is complicated by the involvement of various participants in these attacks, all of whom share legal responsibilities. These actors include the United States government, the Pakistani authorities, the Yemeni government and the armed non-state actors involved in the violence being perpetrated in both Pakistan and Yemen. 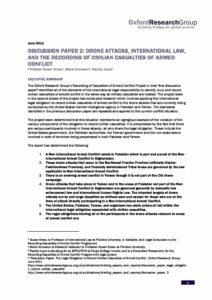 Drone attacks, international law, and the recording of civilian casualties of armed conflict