The new publication produced jointly by CRN member Action On Armed Violence and Harvard Law School, highlights the role of casualty recording in mitigating the human costs of armed conflict.

Acknowledge, Amend, Assist was produced following a two-day global summit held at Harvard Law School in October 2013. The event brought experts from government, civil society, and academia together to explore the challenges of meeting victims’ needs and to learn about where their work might coincide and/or conflict.

The publication examines five approaches to addressing civilian harm – casualty recording, as well as civilian harm tracking, making amends, transitional justice, and victim assistance – and highlights the common areas between these activities, as well as the challenges they encounter individually and collectively. 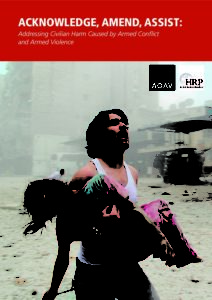