The recent deadly encounters between the security forces and the dreaded Boko Haram insurgents in Baga underscore critical issues in casualty counting in Nigeria.  Between the 3rd and the 7th of January 2015, while most Nigerians relished the euphoria of the New Year, a group of Boko Haram insurgents laid siege on the headquarters of the Multinational Joint Task Force in Baga, Kukawa LGA of Borno state, killing an untold number of people and forcing over 35,000 civilians out of their homes. Conflicting casualty figures were released in quick succession from various quarters. While the Defence Headquarters claimed that about 150 people died in the incident, Amnesty International put the figure at over 2000. Various newspaper reports insisted that scores of casualties were recorded during the massacre, while claims from some government quarters denying the massacre’s occurrence altogether only served to deepen the confusion over conflicting casualty figures.

This is not the first time Baga has been in the news for discrepancies in casualty reporting. On April 4, 2013, more than 200 victims were reported killed when the Multinational Joint Task Force clashed with Boko Haram insurgents. In this particular incident, the National Human Rights Commission (NHRC) reported 37 deaths while national newspapers reported casualty figures that ranged from 185 to 230 fatalities. In response to these conflicting reports the National Assembly set up a 28-man committee chaired by Senator George Thompson Sekibo to ascertain the true figure of the dead victims. Yet, even the report of the committee was unable to clarify the figures or set the record straight. 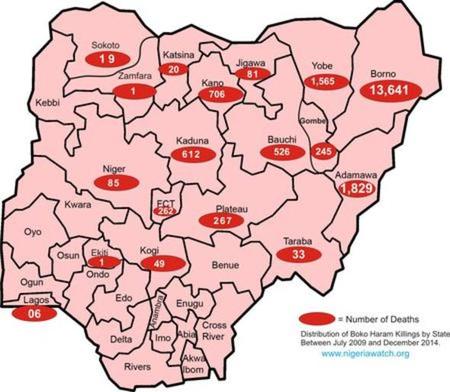 Distribution of Boko Haram killings by state between July 2009 and December 2014. Courtesy of Nigeria Watch.

The challenges faced by casualty recorders in conflict zones cannot be over-emphasised, and Nigeria is no exception. In north-eastern Nigeria, the terrain of conflict is dangerous – accessible only to those courageous and determined enough to risk their own lives to establish the true state of events. To date, a number of journalists have already been killed for their efforts to document the insurgency in the north, while several newspapers that publish their stories have themselves been the targets of terrorist attacks.

The physical dangers of recording are coupled with a lack of necessary tools to conduct recording in such a setting – including sophisticated cameras, video recorders and GPS facilities. In the affected region, there is also an absence of supportive communication infrastructures for monitoring conflict – making data accuracy nearly impossible. Indeed, for most of 2014, the conflict-ridden state of Borno was completely cut off from communication facilities due to the government’s belief that existing communication services were aiding the insurgent’s efforts.* In the face of this communication blackout in Baga – including a lack of mobile phone service – Amnesty International’s claim of 2000 casualties relied on satellite images of the extent of physical destruction, rather than direct media reports on casualties from those in the affected area.

Further challenges to on-going recording efforts are posed by the lack of transparency from the Nigerian military – which has been Spartan with the data it transmits about casualties to the public. Security is a major political issue in Nigeria and security agencies are working to protect the interests of their ‘pay masters’ as the country approaches the 2015 general elections. From all indications, the issue of security will likely be the deciding factor in the next presidential election, and the military is working to project an image that it, and the government, has things under control.

As for the media, their core interest remains profit making, even at the expense of the public good, and it is generally believed that good news does not sell in Nigeria. The higher the body counts, the higher the newspaper sales.  It seems that the smart journalists in the case of Baga have learnt the trick that extremely sad news can readily offer extremely good money.

Despite these seemingly persuasive reasons for biases in casualty reporting, recorders should endeavour to pursue accuracy and objectivity in the discharge of their duties. This is because Casualty recording is an important aspect of measuring risk, assessing the impact of violence, and developing strategies for conflict mitigation in crisis prone areas.  Imprecise recording and reporting not only incites confusion, it also further demeans the dead. Hence, instances of inaccurate casualty recording have the tendency of aggravating an existing crisis.

To avoid bias in our own recording, Nigeria Watch takes a unique approach; extracting information on fatalities from 10 national newspapers daily, comparing figures with reports from security agents, and accepting data from international bodies like Human Rights Watch and Amnesty International in order to mitigate discrepancies with divergent figures from various sources.

Yet in Nigeria, as in the many other conflict-ridden nations around the world, the state must do more to support the recording of every casualty. Official institutions should be evolved and strengthened to monitor and enforce compliance to existing protocols that guide casualty reporting. Without state support, casualty figures in Nigeria will remain highly contested, and the innocent people killed daily since the insurgency began in 2009 will remain uncounted for and unknown.

Dr. Adeola Adams is project coordinator with Nigeria Watch, an organisation which monitors violence and lethal conflicts throughout Nigeria. Its casualty figures are updated daily and available in an online database. Nigeria Watch is a member of Every Casualty’s Casualty Recorders Network, an international network of organisations engaged in recording casualties from around the world.

* As this article goes to press the Nigerian government has announced that power will be restored to Borno state after a 7-month outage.