In this role, Federica will lead the Casualty Recorders Network – the primary network for casualty recorders around the world. She will support the work of around 50 network members and amplify their work. She will also seek to extend the reach of the network, including into ‘forgotten’ conflicts.

On joining the team Federica said:

“I’m really excited to join the team at Every Casualty Counts. The organisation’s mission is very close to my heart.

Casualty recording is so important for many reasons, from recognising the dignity of the dead and their families to accounting for the real costs of a conflict to using data to shape future policies, to name a few. As I think of the devastating conflicts around the world today, casualty recording feels particularly important: it allows us to acknowledge and face the tragedy of thousands of individuals missing or dead and alleviate the suffering of their families.”

Federica has over 15 years’ experience working in the humanitarian and development fields. She joins Every Casualty from the International Committee of the Red Cross (ICRC) where she has focused on programmes supporting missing people or the dead and their families.

“We are delighted to find someone as high-quality, capable and passionate as Federica to join our team. Her talent shone through and with her extensive experience she is a perfect fit to take our work to the next level. We are determined to support casualty recorders and their important, often difficult, work in the many conflicts around the world.”

Federica holds an MSc in Violence, Conflict and Development from the School of Oriental and African Studies (SOAS) and takes up her UK-based role on 20 April 2022.

Notes
You can find out more about the Every Casualty Counts team here.

About Federica Riccardi
Federica holds an MSc in Violence, Conflict and Development at the School of Oriental and African Studies, University of London. Before joining ECC, she had been working in the humanitarian and development sector for over 15 years, of which over a decade was spent working with the International Committee of the Red Cross in the field and at HQ.

Federica has worked in a range of contexts and countries around the world including Colombia, Mexico, Guatemala, Honduras, El Salvador, Peru, Afghanistan, Armenia, Central African Republic, Cameroon, Kosovo, Italy, France, Brussels, Geneva, Jerusalem and Gaza. Over the years, she has focused her work on programmes supporting missing people or the dead and their families, joining forces with states and decisionmakers to encourage them to uphold their obligations under International Human Rights Law and International Humanitarian Law.

You can find out more about the members of the CRN here. 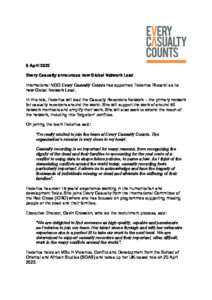