A growing number of states, international organisations and independent experts have endorsed the need for consistent, effective casualty recording. They are listed below. 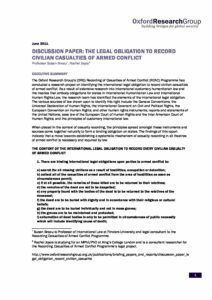 The legal obligation to record casualties of armed conflict

The current and former UN Secretaries-General

The Special Committee on Peacekeeping Operations